The 2019 film Ford v Ferrari, starring Christian Bale and Matt Damon, can be called a racing movie, or a David versus Goliath movie, or a mismatched buddy movie. As an entrepreneur, I saw it as all of those – but I also saw it as a movie with lessons about how the perspective of management has to change and adapt as a business grows from a startup with a prototype to an established production enterprise.

The movie tells, in a fictionalized recounting of history: how, in 1963, the Ford Motor Company begins its pursuit of an audacious and near-impossible goal. 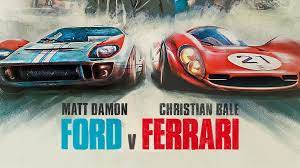 Ford v Ferrari is an entertaining movie with valuable lessons

Henry Ford II is dissatisfied with the state of the company his grandfather founded, and wants to shake things up. Young hotshot executive Lee Iacocca comes up with an idea: acquire Italian car giant Ferrari and its famous stable of hand-crafted marques. Ford isn’t enthusiastic, but allows Iacocca to make the approach.

Enzo Ferrari doesn’t want to sell his company, and says so with some rather creative and colourful insults. Infuriated, his pride hurt, Henry Ford II seeks revenge. He declares that Ford will defeat Ferrari at the prestigious, brutal La Mans 24-hour car race – a race that no American car has ever won.

He hires Shelby Carroll (Damon), a former champion racer and now car builder, and Ken Miles (Bale), a hotheaded engineer and driver. The movie recounts how they went all out to design, build and finally race a car that would win at La Mans and restore Ford’s wounded pride.

Though the movie title is Ford v Ferrari, the rivalry between the two is really just the catalyst that sets the plot in motion. The story is really about the two mavericks, Shelby and Miles, and their experiences working with the Ford Motor Company as they develop the world-beating car that Henry Ford II demands. Both men are creative, open to experimentation, and have hands-on experience of how races – and racecars, and drivers – operate. Their confrontation is not with Ferrari, but the ‘company men’ of Ford: the men who adhere to the corporate way of doing things because they are convinced that the tried and tested processes and procedures are the best.

In a memorable scene, Shelby’s proposal, in a red binder, goes through fully fifteen mid-level managers around the Ford HQ. All of them are cautious, reliable, trustworthy, solid and intelligent men. But this is an unprecedented project with a high degree of uncertainty – i.e., a prototype.

Shelby was a racing driver before he became a car designer and builder, and instinct honed by years of experience tells him what needs to happen for the project to succeed. How does he know? He just does. But the mindset of Ford’s middle management is different. This, after all, is the place where mass production was perfected. What they want is reliable, repeatable, structured and iterative answers – in a word, predictability.

This scene beautifully illustrates the contrast between the mindset required for prototyping – flexible, creative, willing to trust that years of experience can speed up decision-making to the point where it almost seems like a miracle of intuition – and that required for production, where it is vitally important for every stage and step to be carefully planned, executed, supervised and documented.

Both perspectives are important to the success of any entrepreneurial effort. Shelby and Miles, however brilliant they were, would have been very unlikely to beat Ferrari at La Mans without the money, facilities and production power of the mighty Ford Motor Company at their backs. When they want something done, it gets done because the company has the muscle to get it done. At the same time, Ford would not (and historically, did not) have much success building a La Mans-winning car without the experience and experimental, creative attitude of Shelby and Miles. The company struggled to solve the basic challenge of keeping the car moving for 24 hours without overheating or catching on fire.

The movie shows that being flexible and open to new ideas, adapting and pivoting as needed is a vital attribute of management when developing prototypes and new answers to challenges. Once the solution is determined, making it consistent and repeatable demands the rigour and discipline of the production mindset. The wise manager cultivates the ability to do both – and the ability to know which one to apply in which situation.

I highly recommend Ford v Ferrari to my fellow entrepreneurs: it’s a highly entertaining movie with superb racing scenes, great acting and some very funny dialogue, and it delivers several excellent lessons about business, management and leadership that any businessperson can relate to.

So, did all the hard work of Shelby and Miles, and the hard lessons learned by the Ford Motor Company pay off? Yes – in 1966, the Ford GT MK II defeated Ferrari at Le Mans, and just to prove it wasn’t a fluke, they did it again the next year.